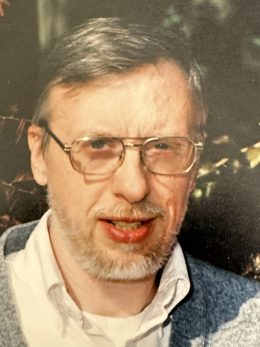 Don was intellectually curious. After retirement from Boston College, he taught himself personal finance and computer programming. When he was diagnosed with a rare form of blood cancer in 2001, he did a deep dive into the science of his disease and its treatments.

There was another side to Don that only those closest to him knew: his matter-of-fact kindness demonstrated by his caregiving work throughout his life. For example, when Don was 16 his mother died. Don eased his dad’s burden by taking over the running of the household. In later years he became his dad’s primary caregiver, often commuting from Boston to Orange. Don was as kind as he was smart.

In June 1988 Don married Jane Gilligan at 9 Lake Avenue, Great Barrington, MA. After their marriage, they lived in Cambridge, MA, enjoying the restaurants, the Celtics, and walks by the Charles River. in 2001 Don and Jane moved to the Berkshires. They loved its beauty, the quiet pace of life, and all the culture. Don was an enjoyable companion with a dry sense of humor.

Don’s caregiving work continued in his marriage. He took care of his wife with calm and extraordinary patience through multiple surgeries and recoveries. He was a good guy and a great husband.

Don was predeceased by his parents and by his older brother Jerry. He is survived by his wife Jane Gilligan, numerous nieces and nephews, and many Richter and Gilligan in laws.

The family would like to thank the medical staffs at Dana Farber in Boston, Suburban Medical in Lee, and Berkshire Medical Center and Hillcrest Oncology Center in Pittsfield, for the outstanding medical care Don received. Condolences may be made through birchesroyfuneralservices.com.